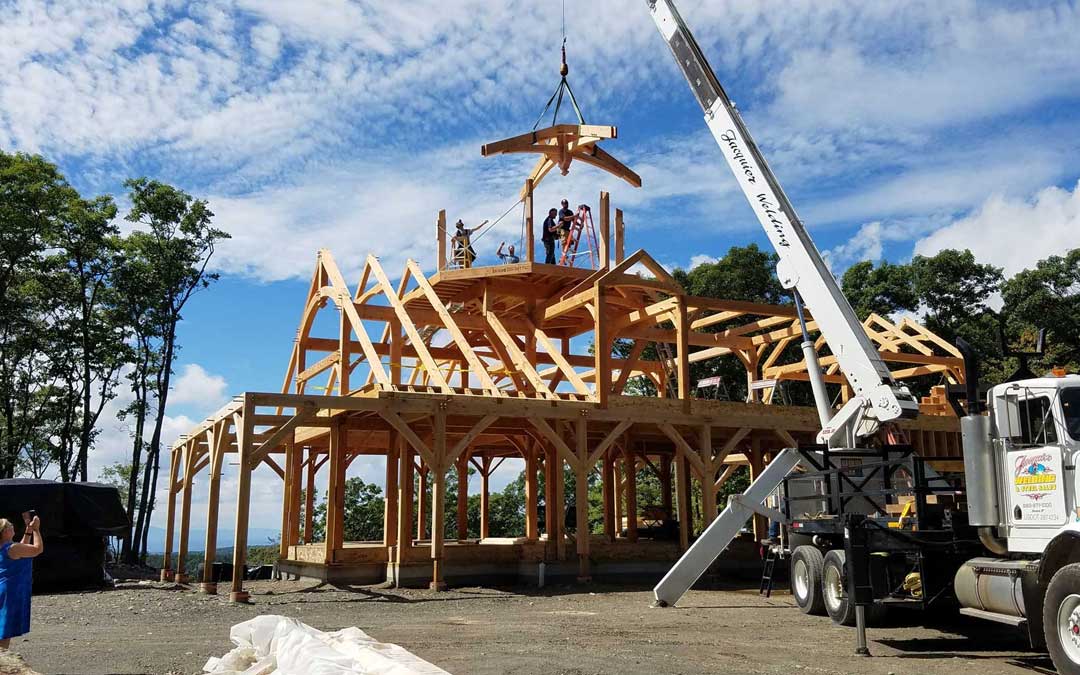 If you are drawn to timber frame homes, then know you’re not alone: this construction method was the dominant building technology from the Greek and Roman Empires all the way to the late 19th century. What you probably didn’t know is that timber frame structures have withstood all that Mother Nature can throw at them, all over the globe, for thousands of years.

Early timber craftspeople developed their skills and tools by building wooden ships that had to be strong enough to withstand punishing ocean storms. These builders and their guilds quickly realized that the same building principles could be applied to structures, making them strong enough to withstand nature’s wrath. The building technique spread to nearly every culture surrounded by hardwood trees.

In 1929, archeologists excavated some of the earliest examples of timber frame construction in Pompeii and Herculaneum, Italy, preserved in ash by the eruption of Mount Vesuvius in 79 AD.

The durability of these structures is quite remarkable worldwide. Japan has some of the oldest timber frame structures in the world, despite the region being plagued by frequent earthquakes. In England and Germany, there are tours of timber frame homes built in the 11th and 12th centuries that have withstood extreme weather and two world wars. These structures were built with exposed beams, and the space between filled in with wattle, or straw, and daub, a mixture of mud and manure that hardened like concrete.

Though we often think of timber frame craftsmanship being used in homes and barns, many cathedrals in Europe were built with the same technology. These edifices were used as visual aids to reinforce the merits of Christianity. Timber frame churches were built in the shape of the cross and the parishioners’ attention focused heavenward, with the help of long, vaulted ceilings supported by gracefully curved beams. Many are still in use, centuries later, a testament to their durability.

In contrast to the historical structures that left beams exposed to the elements, modern timber frame home kits enclose the beams within a building envelope. At Woodhouse, we enclose your dream home with structural insulated panels or SIPs.

When you are shopping for timber frame home plans, know that timber frame home builders have been improving on this ancient art with modern technology. Consider what kind of envelope will be shielding your frame from Mother Nature.

SIPs provide a raft of advantages over conventional stick frame and batt insulation construction. This includes greater structural strength and greater energy performance—up to 75% more efficient than stick and batt construction. That means long-term energy savings over the life of the home. SIPs also arrive on site pre-built, dramatically reducing construction time and saving you money on labor expenses.

SIPs are a composite material, consisting of an insulating layer of the rigid core, sandwiched between two layers of oriented strand board or OSB. It’s the same structural properties of an I-beam. An added safety benefit, SIPs are rated Class 1 in fire performance. SIPs don’t burn as much as they melt, which means that fire will spread slower than many other building materials.

Woodhouse engineers SIPs with internal posts to carry point loads from the attached timber frame. The combination of these two components creates a uniquely strong structure. The ability to withstand hurricane-force winds means that your dream home will not only surpass the strict standards of today’s building codes, but will also last for generations to come.

In our 40+ years of designing timber frame kits, the Woodhouse team has heard from clients whose homes have resited earthquakes, forest fires, hurricanes, tornadoes, and blizzards. It’s why we here at Woodhouse feel so confident in offering our transferrable lifetime warranty. We build dream homes that truly last generations, that’s the Woodhouse Difference.

To see how this translates to your everyday life, check out our Top 10 Pre-Designed Floor Plans.